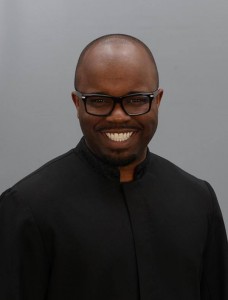 Rev. Lorenzo R. Small, Sr. was born on June 5, 1974 to Ms. Evon Small and Mr. Lorenzo Smith in Norfolk, VA. He is the oldest of four children.  He attended the public schools of Dunn, NC and attended North Carolina A&T State University in Greensboro, NC where he studied finance and graduated in May 1998 with highest honors.  Rev. Small left North Carolina after graduation to accept a position with 3M Corporation in St. Paul, MN. Following a short stint with 3M, he worked for several years as a pharmaceutical sales representative with Eli Lilly & Company.

Shortly after moving to Minnesota, Rev. Small joined Shiloh Missionary Baptist Church (MBC) where he served as Deacon, Chair of Deacon Board, Chair of Finance Committee and President of the Young Adult Ministry. He was called to the ministry and licensed in February 2005 and was ordained in April 2006, by Rev. Steve Daniels, Jr., Pastor of Shiloh MBC.

Led by God’s spirit, Rev. Small enrolled in seminary training and pursued that commitment when he and his wife returned to NC in 2006. He joined First Fellowship Ministries of Charlotte, where he served as Associate Pastor. In January 2011, he was invited to preach at Pleasant Ridge Presbyterian Church in Lancaster, SC and has been there since. He graduated from Union Presbyterian Seminary in April 2013 with a Master of Divinity degree.  He was ordained as a PCUSA Teaching Elder and installed as the full-time pastor of Pleasant Ridge Presbyterian Church on June 8, 2014.

Rev. Small is happily married to Alexis Rembert Small and has been so for 17 years.  They are the proud parents of three sons: Antray, Lorenzo Jr., and Alexander.  They currently reside in Lancaster, SC.